On October 10, my oncologist broke up with me after five years. It wasn’t him, it wasn’t me, it was NED. Thank God for NED – full name Nil Evidence of Disease – for coming between us. As nice as my oncologist is, that relationship was going nowhere.

While I’d been sitting waiting for my appointment to see the good doctor, I’d come across the Queensland Writers Centre #8WordStory competition on Twitter. As the hashtag would suggest, the challenge was to tell a story via Twitter using only eight words. The best entries – as judged by writers such as Nick Earls and Benjamin Law – would be published on electronic billboards on major roads in Brisbane and the Gold Coast.

After my doctor told me about NED, I knew immediately what my story would be. I sat in my car in the cancer unit car park and tapped out my entry, and four weeks later I got a message telling me that from over 6,000 entries, mine had been picked for publication! Here’s my story in its electronic glory on the Inner City Bypass at Bowen Hills in Brisbane:

Coinciding with my final oncologist appointment, was his decision to take me off the dreaded Anastrozole. This drug provides a 25% increase in survival in the first 5 years post-diagnosis, but it has the most hideous side-effects, the key one for me in the end being osteoporosis which caused my arm to be smashed into tiny pieces after a minor fall in April this year, resulting in major surgery to turn my limb into Frankenarm.

I had hated Anastrozole with a passion for nigh-on five years, but the moment my oncologist told me I could stop taking it, I was worried. Since the day of my mastectomy in 2012, I have been having some sort of treatment for cancer. Was Anastrozole the only thing keeping it at bay? Wouldn’t it be better to keep taking it just in case? Surely I could just wear my bubble-wrap outfit forever to keep my bones in one piece. 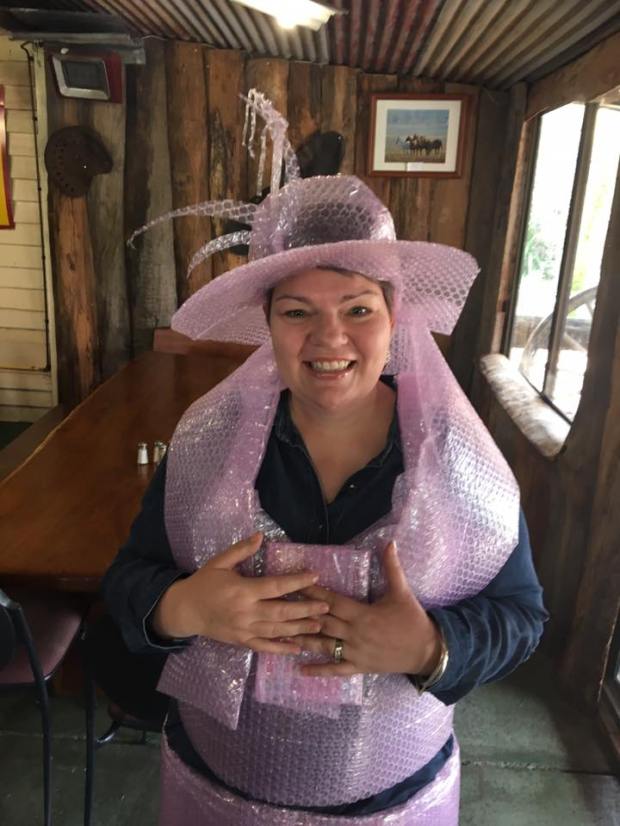 And you thought I was joking about having a bubble-wrap outfit.

But as part of his final pep talk, my oncologist told me that Anastrozole had done its job, and could do no more. ‘You do not need a security blanket, Julie.’ where his exact words. And like he had been about so many things – ‘Yes, we are giving you enough chemotherapy, not everyone gets the vomits’ – he was right. I don’t need a security blanket. I need to move on, carefully gather my fragile bones, and get the fuck on with life completely outside the hideous but reassuring grip of cancer treatment.

That doesn’t mean I will (or could) forget about cancer. Thanks to those of you who donated online, plus my ever-generous work colleagues, we raised over $800 for the National Breast Cancer Foundation, who will put this money directly into research. With donations like ours, a cure will one day be found and this blog and its tales of cancer will become like the Egyptian pyramid texts – so completely other-wordly that they will need a specialist to decipher them. Especially the sweary bits.