Five years ago, I was, entirely without my permission, parachuted (minus the parachute) into Cancer Land.

Shit place to visit, nobody lives there.

Today, I got asked to leave. Unceremoniously told that my presence is no longer required.

I really, really want to write an eloquent post about how this feels (And then have it shared a million times by people who then tell me I’m an inspiration. Because if there’s one thing that’s great about having survived cancer, it’s being an inspiration to those who have won the health lottery and have been lucky enough not to get it. )

Instead, I sit here in shock. Five years ago I was told I had less than 50% chance of being alive enough to sit here in shock . But here I sit, having just seen my oncologist, to be told my results are again all clear, and as such he is discharging me from his care.

I asked him to be in a selfie with me to mark the occasion. He said he wished he’d worn a tie, and I said not to worry I’d photoshop one in. 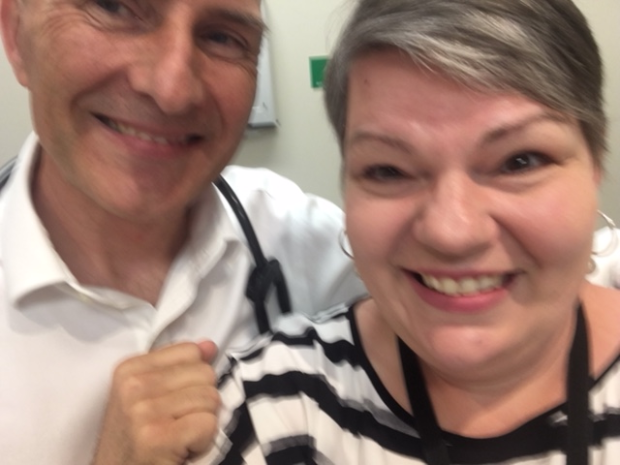 I lied. Sorry Dr Vasey, I don’t know how to photoshop stuff in or out, and if I did my priority wouldn’t be your tie, it’d be reinstating your forehead and fixing my crazy, crazy eyes.

Seriously though, how good do I look as someone excitedly on the verge of tears because five years passed by and my oncologist broke up with me?

There is no cure for cancer, but for me, today, there is complete remission with NED – Nil Evidence of Disease.

That’ll do pig, that’ll do.