In 2016, I ran a series of posts called Fertility Friday. They were guest posts from friends, readers and other bloggers  about fertility, and how families are made, lost and sometimes made anew. They were stories of hope and sadness; real stories from real women, whose strength and courage defies what we often think is humanly possible. At the time, I asked my friend Rochelle to write her story, but she was knee-deep in cancer treatment and parenting, and didn’t quite get there. Two years later, and Rochelle is no longer having treatment, but rather having her pain managed whilst she faces the progression of the disease which will inevitably kill her. I have known a lot of strong women in my life but Rochelle is next level. As her friend, I bow down to her strength, courage, honesty, resilience and humour.

They say being a parent is the hardest job in the world. It certainly isn’t easy. For some of us, that job is made virtually impossible.

My name is Rochelle. I am 35 years old and I’m currently under the care of my local palliative team because I have metastatic, stage 4 breast cancer. I’m also a mum to two young boys.

I was 27 years old and my son Corin was 11 months old when I was first diagnosed with breast cancer. So while I was raising a baby and celebrating his first birthday and milestones such as walking and talking, I was also undergoing surgeries, chemotherapy, radiotherapy, scans, blood tests and more doctors’ appointments than imaginable.

We waded our way through that year of shit and emerged out the other side ready to get back to normal. We discussed having another baby and were told that it wasn’t an unreasonable expectation. We knew the chances of me getting pregnant again were very slim with all the cancer treatment I’d had. We were so grateful to have the child we had and if a second happened it would be amazing; if not we would be content with the one.

Surprisingly, we got pregnant within a few months with baby number two. It was an exhausting pregnancy. I had underestimated the toll all the cancer treatment had taken on my body. But we soldiered on and welcomed our second son, Beau. Life was busy, exhausting and ‘normal’. He was a baby who barely slept until about a week before his first birthday, but he was bloody cute.

When he was about 10 months old I started experiencing some unexplained chest pains. Ultrasounds and mammograms couldn’t find anything. Eventually I had an MRI. The day before Beau’s first birthday I got the results which said the cancer had returned, but this time it had adhered to my sternum which meant that the cancer had spread and while we could try to manage it, I would never be cured. This was 4 years and 9 months ago. The cancer has progressed and has spread to my bones, lungs and liver. During this time there have been more surgeries, radiotherapy, blood tests, scans, hospital stays and up until a month ago I had non-stop chemo. All of this while trying to manage a normal life for my kids.

Juggling doctors’ appointments and chemo side effects with school events and general life has been so bloody hard. We are living in rural NSW and all our family is in New Zealand. I have amazing support with a couple of friends and neighbours and they have made all the difference.

All I wanted in life was to create the loving, caring, supportive family that I never had growing up. I wanted to create confident children who knew they were loved and who felt safe, secure and wanted. I wanted to experience life with my children and see the wonder and amazement as they learn. Although I have given it my all and I’ve done an amazing job, I still feel like cancer hasn’t allowed me to reach the goals I wanted. It makes me sad that I have to sit on the sideline and watch them because I don’t have the physical capability to join in. I can’t always read stories to them because I’m too exhausted to talk. There isn’t the energy for big days out at parks or events, because although my spirit is willing, my body is just not able.

I have been asked if I feel like a normal mum. Sadly I don’t know what normal is, because cancer is my normal. I haven’t had the option to parent any other way. It breaks my heart that this is all my children know as a mother. That’s not fair on any child. But I have hope that it has set them up with more compassion for others, understanding, determination and resilience. They are amazing boys and I’m so proud of them. They are both so intelligent, clever and both have the most amazing sense of humour which will hopefully serve them well through their tough times.

Keeping my sense of humour has definitely been my saving grace. In saying that I still get hated like regular mums. I get told that they hate me, that they don’t want to be my friend, I’ve been told that they wished I was dead so they can get a nicer mum who lets them have whatever they want. That stings far worse for me than it does for regular mums, obviously. But I know they don’t mean it, I just hope they don’t remember saying it later on. They’re too young to really understand how tough things have been for all of us but I hope that as they grow they can look back with more appreciation and understanding and really be grateful at how hard it was for me and that I never gave up and I did everything I could for them. 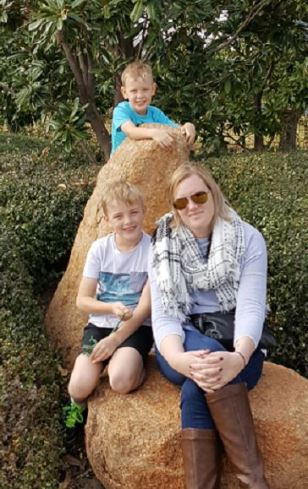 I got to meet some important milestones like getting them both to school for their first days, and each birthday and Christmas has been an amazing achievement. We’ve had some amazing holiday experiences like going to Fiji, and my first time at the snow was with my boys. We also all have great memories of seeing our beloved All Blacks play live.

Cancer has taught me a lot. A lot about myself. I’m stronger than I ever imagined I could be. I have learned who I want to be as a person, and it is a very different person to the one I was raised and conditioned to be. I see the world through my own eyes, not the way I was taught to see it.

I have learned a lot about other people. The people who should have your back, often don’t, and it’s not about you, it’s about them. I was conditioned to tolerate a lot of shit from people because they’re family, that’s what you do. You forgive and move on. Sorry, no. Because often that same shit repeats itself. If people are causing you distress through their actions, words and treatment then you don’t have to continue that relationship because you’re ‘family’. Family still has to earn respect just like everybody else. I have had to sever a relationship that should never have even been a consideration. It was hard. I copped a lot of hate and flack for it. But I stand by my decision. It was the best decision I have ever made for myself and my mental health. And sadly, I would do it all over again if I had to.

I have learned so much about life. Given everything I’ve been through I should be bitter and miserable. I’m not. I’m still a really happy person. I enjoy spending time with my friends and trying to feel ‘normal’. That doesn’t mean I’m not angry, or disappointed. It doesn’t mean that I don’t cry about things. I am angry that this has happened to me and to my kids. I’m disappointed that I deserved better in life and should have done more with my life before I got sick. But I think we are all guilty of taking life for granted. I think we get so used to just treading water and getting through each day that we easily forget about the bigger picture. I cry. A lot. Mostly because nothing in my life will ever be better and there is nothing I can do about it. I can’t dwell on it. I have to be grateful for what I have and for every new day I’m given with my boys. I remind myself all the time that there is always someone worse off than me. It sounds cheesy but it’s true.

Every day I wish my life could have been different. If I could talk to my teenage self I would tell her that her feelings, thoughts and emotions are valid and worthy. That she is more intelligent than people give her credit for. That the steely exterior she had to create to protect herself isn’t who she truly is. That it’s ok to be herself, to go against the grain and create the life you want rather than the life everyone else wants and expects of you. Then I remind myself that it has all made me who I am. And I have to be proud of taking those lemons and making the best fucking lemonade I could.

Rochelle, my dear, dear friend, I have no doubt this was written about you:

“She made broken look beautiful
and strong look invincible.
She walked with the Universe
on her shoulders and made it
look like a pair of wings.”