My boy is almost eight years old. Growing so tall, his head up to my chest, his adult teeth jockeying for space in his mouth, and his already skilful use of sarcasm giving us an acerbic taste of things to come.

Somehow, over the last couple of months, he’s discovered the music of AC/DC, and so now every trip in the car involves TNT or Long Way to the Top or Jailbreak being turned up loud, whilst much lip-synching and air guitar takes place in the back seat. He has even talked his piano teacher into giving him singing lessons, which involve them practising one song that she chooses (You’ve Got a Friend in Me from Toy Story) and one that he chooses (Dirty Deeds Done Dirt Cheap from the album of the same name). Apparently the boy who has his lesson after Hugh has started arriving early so he can do air drum accompaniment to Acca Dacca.

Yesterday, when I picked him up after school, he jumped into the car and immediately said ‘Mum, can you put one of my songs on?’ I can almost smell the teenage years from this vantage point, but at that moment I was transported directly back to the time when my boy was still a baby.

When I was pregnant with Hugh, we bought a musical cot mobile, which we would turn on every time our newborn was put down for a sleep. It stayed attached to the cot and was turned on every night, through those early months, into young babyhood, and through to the toddler years, when one of his first words was ‘songson’ – because each night as part of bedtime routine, I would say ‘let’s put your songs on’. If I ever forgot, I was reminded by my boy ‘songson, Mummy, songson’ and with the press of a button he would roll onto his preferred side, hug his teddy and sigh a deep, contented sigh. Songson meant all was right in his world.

When he transitioned into a bed at 2.5, the slowly rotating arm which had toy frogs and birds swinging off it was put away in the cupboard, but the music box was firmly attached to the head of the bed. Now able to switch it on himself, he showed a clear preference for Beethoven, with the red button always pushed first as he lay himself down for sleep. Sometimes in the early hours of the morning, I would hear the familiar lilting sounds as he woke too early and sought to soothe himself back to sleep with songson.

Today, almost eight years from the day it was purchased in anticipation of our baby boy’s arrival, that music box is still firmly attached to the head of his bed. It’s now surrounded by Star Wars stickers, and his bedside table is stacked with books filled with fart jokes and tales about treehouses, but every single night, without fail, the red button is pushed and he is lulled to sleep by the gentle tinkle of Beethoven, Mozart and Bach. 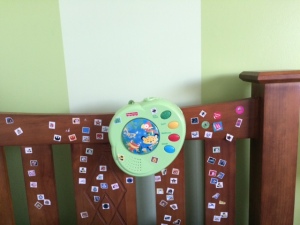 I know that one day, he’ll take that music box down and put it in the cupboard with the rotating arm and toys. But at the moment, by day we may be riding down the highway going to a show, however by night, every night, we are still listening to the soothing lullaby of Beethoven, Bach and Mozart.