This week’s Fertility Friday post is by Azette. I went to high school with her and her husband Mark and we reconnected via Facebook a few years ago. When I asked her to share her story, I had no idea of how Azette came to be the mother of an only child, and I feel incredibly privileged that she agreed to open up her heart here. Only child families are unusual, and in my experience often treated as incomplete, and met with either pity or contempt. But being a family of three is as special and as ordinary as any other family. And here’s why.

When Julie asked me to consider writing something for her “Fertility Friday” series, I was firstly honoured to be asked, as I have followed the stories of her other guest bloggers with interest.  But then I became nervous and unsure what to say, as I had not personally experienced any fertility issues. Contrary to popular belief, it wasn’t because of fertility reasons that I ended up a mother of “only one”.

My husband and I met when I was 16, starting dating a year later and were married five years after that.  From the moment we were married, and then periodically for the next eight and a half years we fended off the constant question from family and friends – “when are you having children?”

Over time the frequency of people asking did diminish, and I developed a few standard responses to diffuse the situation. My favourite was that I couldn’t keep the goldfish alive, so it wouldn’t be a good idea for me to be a parent.  In reality, life had been busy, we both worked long hours, travelled when we could get holidays and time slipped by.  The major factor was we’d just never sat down and had “that” conversation.  I wasn’t someone who had set a personal deadline for having children.  I hadn’t decided not to have kids, but I also hadn’t decided to make it happen either.

Shortly before our ninth wedding anniversary, we did have “that” conversation, which ended along the lines of “well, if we’re ever going to do it, we better do it now”. We were one of the lucky couples and within a relatively short period of time (six months or so) I fell pregnant, and it filled me with terror.  What had we done?  I didn’t know what to do with a baby, what if I was a terrible mother?  As I sat in the doctors surgery and she confirmed I was definitely pregnant, my first words were “Oh shit!”   My GP looked at me and said, “but I thought this was planned?” to which I replied, “yes, but now I can’t change my mind”.

It wasn’t just the fear of motherhood, but also the fear of getting my hopes up, the fear of falling in love with this baby and what if I miscarried, what if something went wrong.  I convinced myself not to get attached, don’t get too excited, not until we were sure everything was going to be OK. As we did start to tell people, the most common reaction was shock, and a few brave souls were truthful enough to admit that they thought we had been on IVF and that’s why it had taken so long for us to fall pregnant.  There seemed to be this unwritten law about when it was socially acceptable to have children, and because we had waited and not complied with this guideline, it must have meant there was something wrong.

One month short of our 10th wedding anniversary, our precious son arrived, not quite as we planned, but safely.  When people talk about preparing their birth plan, and which scented candles they’ll have and which music will be playing while their bundle of joy arrives, I strongly encourage them to have a Plan A, B, C, D and even E in mind.  I’d thought it would be lovely to have a water birth, with calming music, and as few drugs as possible, but ended up with a caesarean and lots of drugs, after all attempts to deliver naturally didn’t work out. Then the joy of breastfeeding … well that was a total disaster and after many days of pain, tears, screaming, hungry baby and mastitis that sent me back to hospital, we switched to formula and peace and tranquillity were restored.

Our personal circumstances dictated that I needed to go back to work when bubby was three months old.  Initially it was for only three days per week, but within a very short period of time I was back working full time.  However, I was lucky that a close friend had decided to start family day care, and so I was able to leave my son in a family home, with someone I trusted implicitly, and truth be told, would probably do a better job as she knew what she was doing after three kids of her own.  But even with these benefits it didn’t make the morning drop off any easier.  For the first two years of my son’s life I cried for the entire drive from my friend’s home to my work. Every day.  I wasn’t crying for my son, as I knew he was well looked after and well loved, I cried for me and what I was missing.

So inevitably, as our son neared two years old, the questions started again, “when are you having your next one?”, and we had to deflect this next round of questions.  My new standard response was that I couldn’t be so lucky twice.  I’d never get another baby that was so content and such a good sleeper, and that I wasn’t willing to tempt fate in case I had a devil child second time around.  The truth was, I wasn’t brave enough. Knowing how hard it was to leave my bubby to go to work, and the emotional toll it was taking on me, I didn’t have the emotional strength to do it again.  I believed it would be double the tears and double the pain leaving two children in someone else’s care, and decided I would rather be a good mum to one, than have more children and risk falling apart, or risk ruining our marriage and the precious family we currently had.

Some will say it was a selfish decision, but I’ve made peace with my choice that it was the best for our family.  We’ve raised a well-mannered, respectful, loving and compassionate young man.  Being an only child has meant he has had to learn to communicate with adults early on in his life, and often that he has been part of conversations that children are usually sheltered from.  I’m proud of our very close knit little family that can openly discuss topics that others may shy away from.  This was very evident when my mum was diagnosed with cancer and we needed to have some very heartbreaking conversations as each of us worked through our emotions and the impact her illness was having as it progressed.

My mum once commented about feeling pride that my son was “mine”, but I believe he is only on loan.  I will only have him for a short time, and the most important job I will ever have in my life, is to guide him to be the best he can be, before he will move onto his own life.

Looking back on it all, I describe myself as being “pro-choice” and a strong believer in doing what is right for you, not what everyone else may think you “should” do ….

If natural birth works – fantastic, if it doesn’t, be grateful for modern medicine and Caesarean births.

If breastfeeding works – great, if it doesn’t, say thanks to modern science for baby formula.

If you want to have kids, and you can – wonderful, if you choose not to, that’s OK too. (Although my heart breaks for those that desperately want and would love children, but are unable.)

If you want to have 10 kids, and you can, that’s awesome (just don’t bring them all to my place for a sleepover at the same time).

And if you choose to only have one, cherish them with all your heart. 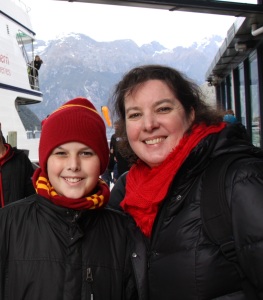