It’s October, which means it’s Breast Cancer Awareness Month. It also means that about a week’s time, it’ll be three years since I was diagnosed with breast cancer. Three years. I know I should be moved to wax lyrical, but all I can think is holy fuck, three years. Three. Years. Such a short time; such a long time. Such a hard time; such a good time. So much fear; so much grace.

The fact that it’s October pretty much passed me by until about ten minutes ago. That’s because this year September pulled out the big guns to take all of October’s shitty limelight, and wrested the crown of most bullshit month ever.

September started out really well, with Dave’s university graduation and Father’s Day celebrated with a hangover. I then felt a bit sad, as September 9 is my Dad’s birthday, and the first without him here. He was a cranky old shit who would let you know in no uncertain terms if the present you had so thoughtfully chosen was not really going to work for him ‘what am I supposed to do with this?‘, but he was my Dad, and he’s gone.

Moving on from that momentary melancholy, was the high point of the month, with Tony Abbott getting unceremoniously arseholed by the silver fox that is Malcolm Turnbull. 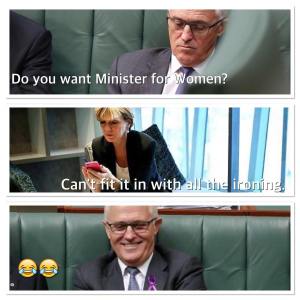 We then rolled into the last two weeks of school, winding down towards a few days at the Gold Coast and then on to our long-awaited and militarily planned camping trip with our usual camping buddies. Firewood was gathered and packed, water bladders filled, menus decided upon and food purchased, tents and sleeping bags and toilet paper all packed.

And then, dear reader, it all went to shit. We arrived at the Gold Coast, and we got about 45 minutes at the beach with my beautiful friend Antoinette and her husband and kids before Hugh took ill. Hugh basically never takes ill, so I was completely unprepared for the onslaught of crazily high fevers, vomiting and diarrhoea. We headed home, cancelled the camping trip, unpacked all the wood, and the water, and the tents and the sleeping bags and the toilet paper, and waited, despite Dave’s suggestion that we should take him to the doctor, for him to get better. Except he didn’t get better, and by Thursday night we were in Emergency being told that he had pneumonia, and would have to be admitted.

It won’t surprise you to know, that after miscarriages, and cancer and the whole thing with my Dad dying earlier this year, hospitals freak me out.  I stood watching as my 7-year-old had a chest x-ray, thinking about the ultrasound I’d had in the same place four years ago, which showed our miracle pregnancy was no longer a miracle. I sat looking at my 7-year-old lying listless on a gurney in Emergency thinking about how my Dad had looked on a very similar gurney when he was close to death in February. And when the doctor put the chest x-ray on the light box to show us our boy’s congested lungs, I remembered, so clearly that I could smell the smells and taste the fear, of the anaesthetist showing me the x-ray of my lungs before I went into surgery. My lungs were clear but my right breast looked like a giant white cloud of cancer.

I sat for four days in a chair next to my boy’s bed as the oxygen, antibiotics and fluids worked to fix his poor, sick little body. I felt so cold the whole time, but especially that first night, full of my own fear, combined with a decent dose of guilt that I had not realised how sick my child was, even as his lungs were struggling to work. Had I let my own anxiety about doctors prevent me from seeking help sooner? I don’t think so, because I truly thought he had a virus that would pass, as viruses do, but, I have to be honest and say … maybe. Maybe.

So here I sit, with my big, fat maybe. Hugh is out of hospital, and doing well. He’s had the shittiest school holidays ever, but has been rewarded with about as much Pokemon paraphernalia as a boy can handle. He’s a robust and otherwise healthy child, so he’ll bounce back and no doubt be regaling his school mates with stories of x-rays and drips and wheelchair rides. My boy is going to be just fine, and I am utterly relieved and thankful, but also shaken by the notion that maybe I’m not as just fine as I thought I was. I’m going to let the dust settle on this, and then I’m going to have my annual mammogram and my three-year post-diagnosis review, and I’m going to talk to my doctor about where I’m at.

Maybe I’m at where I should be. Maybe it’s normal. Maybe nothing’s ever going to be normal again.