Welcome to Breast Cancer Awareness Month, where breasts are actually optional. Over the coming weeks I’ll be sharing this blog with some other writers, but I’m going to kick off the month with a post of my own, because after all, it is my blog and therefore all about moi.

This is what someone who has cancer but doesn’t yet know it looks like: 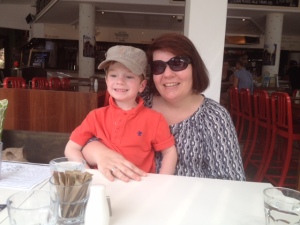 September 2012, on holiday at Noosa. The week before I’d had a mammogram, ultrasound and biopsy which had come back as ‘atypical cells’ which the GP told me usually meant normal cells which were squashed in the process of taking the sample. I was sent for another ultrasound and biopsy three days after this photo was taken. No, they weren’t normal cells that got squashed, they were high-grade aggressive cancer cells.

This is what someone who has had a mastectomy looks like:

Yep, pretty much exactly the same as the before cancer shot. By this stage my right breast and all of the lymph nodes from my right armpit have been removed, and I am waiting five weeks for the surgical site to heal before starting chemotherapy. I was so terrified for those five weeks. Terrified at the thought of having to have chemo and terrified at the thought of not having it soon enough. Oh and in case you’re wondering, no, people with cancer aren’t forced to wear the same shirt every day like some sort of uniform.

Pretty unimpressive, isn’t it? The green sign attached to the bag on the right says ‘Neulasta’. That was put there each time to remind the nurse to send me home with the vial and syringe which I had to inject 24 hours after chemo. Without the Neulasta, I wouldn’t have been able to have the chemo regime I did. One word typed on a green sign = reason I am alive today.

This is what someone who is having chemotherapy looks like:

I took this on Christmas Day 2012, to get a photo of the gorgeous earrings Dave bought for me. I thought I looked pretty good at the time, but looking at this photo now, I can see that I looked pretty dreadful. The terrible blackness around my eyes, the mottled brown pattern on my cheeks and jawline, the puffiness of my face and of course the baldness of my head were all testament to the poison that was fortnightly being pumped into my poor, beleaguered body.

This is what someone who is having radiation therapy looks like:

Woo hoo, look at that hair! I felt sheer delight when the peach fuzz started appearing on my head. Under that shirt and scarf there were extensive third degree burns which had to be attended to multiple times daily, but I had hair!!

And this is what someone who is 1 year and 361 days on from diagnosis looks like:

This one’s for you, cancer.