Last week, the second series of the Australian television drama The Time of Our Lives started on ABC. I’d seen on the promos that one of the plot lines for this series would be one of the lead characters dealing with finding out she has one of the BRCA gene mutations, which means she is at significant risk of developing breast cancer. I don’t have a BRCA mutation, but since I was launched unceremoniously into breast cancer world in 2012, I have learned far more than I ever wanted to know about the subject. Actually, I probably know enough to open up a theme park called Breast Cancer World, which would feature fun rides like emotional rollercoaster that once you get on you can never get off and the menopausal mood swings that go up very high and then down very low. Side show alley would include the House of Horrors, where chemo patients would roam about scaring unsuspecting small children with their hairlessness. 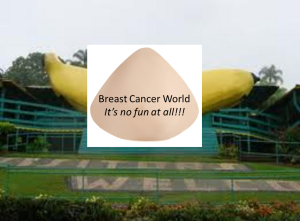 If this blog doesn’t work out, I’m thinking of getting into graphic design.

The breast cancer plot line in The Time of Our Lives has so far been handled in a pretty accurate way, which makes me think at least one of the writers has some intimate experience with cancer. There was one line in last week’s episode that particularly struck a chord with me. The character of Bernadette goes alone to her appointment with the genetic counsellor, where she is told she carries one of the BRCA mutations. She then sits on this information for a few days, before blurting it out to her partner. He comments that he is concerned she went to the appointment unsupported, and doesn’t have to do it alone. Her response is very poignant, and I believe very true: ‘I am alone’.

When you are going through the process of diagnosis and treatment, and then living in the aftermath of cancer, there are many times when you have no choice but to be alone, and there are also just as many times when you have choices, but still choose to be on your own. The confirmation of my diagnosis came via a phone call, and that was the first indication to me that no matter how much support you have as someone with cancer, you are essentially alone. It is not a shared experience, it cannot be. The disease is in you, the type, stage and manifestation is particular to you, and it is trying to kill you. You will often be surrounded by others – people who you love, medical staff, strangers – but still be entirely alone. A large part of the cancer experience is mental and the internal monologue, which is a solo act performed for an audience of one – yourself – is relentless. Am I going to die? I probably am going to die. I don’t want to die. What will happen to my kids if I die? How will I die? Where will I die? I wonder what’s going to be served for morning tea at chemo today?

For those playing along at home, the answer was ANZAC biscuits.

Radiation therapy was, for me, the ultimate experience in being alone. Every day for six weeks I would lie naked from the waist up, on a metal slab, perfectly still with my head and arms positioned in a moulded cradle made just for me, in a large, lead-lined room. The radiographers would sit in a separate room, away from the potentially deadly ionising radiation, watching via closed circuit tv as the machine rotated its way around my body. The fact that this was happening to me, and me alone, could not have been more apparent as it was during every one of those daily sessions. Every day I fought a battle in my head, watching the machine rotate around me, staring at the blank white walls, breathing in and out. All alone.

Now I’m in the first throes of being a cancer survivor, I am still alone. Please don’t mistake being alone for being lonely. I am not lonely, ever. I have all the love, and support and care that any person could ever hope for. But my soul lives alone in my body, which at any given moment could be betraying it. Right now my cancer could be re-generating in a tiny skerrick of tissue left behind when my breast was removed, or metastising itself in some other part of me like my lungs or my liver or my brain. I am alone with this knowledge, it is my individual truth. My oncologist knows it in theory, talks to me about my numbers and my percentages and my chances, but ultimately if my cancer comes back, it will come back to me, and me alone.

It took being a part of a group to make me realise that it wasn’t just me who felt that the real, nitty gritty experience of cancer is done alone. I’ve always struggled with a true definition of irony, but I think that having a conversation with your cancer support group where everyone agrees that cancer is, in essence experienced alone, probably fits the bill.

Of course there are parts of the cancer experience that could not be managed without the presence of others to soothe, comfort and reassure, and other parts where you crave shared experience when it is simply not possible. Sometimes you seek out opportunities to be alone, sometimes you accept being alone because there is no choice, and sometimes you wish that you were not so alone,  if even for a second. The French writer Sidonie-Gabrielle Colette sums it up far more poetically than I: “There are days when solitude is heady wine that intoxicates you, others when it is a bitter tonic, and still others when it is a poison that makes you beat your head against the wall”.