On this day in 1967, in a tiny little hospital in country Victoria, a baby called David was born. He was the fourth boy to come into the family, with beautiful red hair and bright blue eyes. The red hair is important to this story, as two years later in a town in Queensland a little girl was born, and it would become clear once she was a teenager and saw the character of Richie Cunningham in the tv show Happy Days, that she had a thing for red-headed boys. Apparently natural red-heads represent only 0.5% of the world’s population, which may explain why it took that girl until she was 36 years old to meet the red-headed bloke of her dreams.

I found my thrill …

That baby boy is my husband Dave, who celebrates his birthday today, and that girl with a penchant for red-heads has never lost her taste for them, but these days it focussed on just one ginger in particular.

When you get to the age of 36 and you are still unmarried, you pretty much resign yourself to a life of singledom, but I was a never say never kinda girl, and so with low expectations but sporting a red shirt which made the most of my great rack just in case, I embarked on a blind date on Sunday, 11 December 2005. We met for lunch, which turned into a four-hour conversation, which turned into dinner the next night, which turned into a proposal in Sydney on my birthday eight months later. We got married on 16 December 2006. 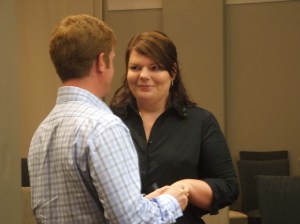 Love, honour and … check me out people, my very own Richie Cunningham!

There are many words that I could use to describe Dave, who is in fact a man of very few words. He is funny, smart, and incredibly capable, and above all a loving partner and devoted father. At the age of 42, he decided to quit his job as a boilermaker and go to university for the first time to do a Bachelor of Education so he could become a special education teacher. It took phenomenal guts to take that plunge, but he has stuck at it, achieving a GPA of nerd-like proportions with now only six courses left until graduation. Of course he has his faults, including starting a sentence ………… and then finishing it twenty minutes later, and apparently untreatable male blindness which causes him to be unable to find things despite them being exactly where they’ve always been. But I’m not going to mention those faults here because it would be rude given it’s his birthday today.

Of course it hasn’t all been beer and skittles for us. I found out I had cancer just prior to our sixth wedding anniversary, and the aforementioned great rack got turned into a not-so-impressive coat hook. Despite what telemovies and inspirational posters would have us believe, cancer does not bring out the best in you, it brings out the absolute worst – and I look back now and wonder at Dave’s ability to maintain his quiet, stoic support through my regular bouts of complete selfishness and utter irrationality. 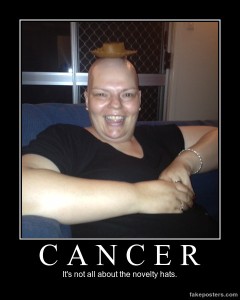 Today our life bubbles along. I like to cook and he cleans up, I break things and he fixes them, I am a menopausal seether and yet he doesn’t feel the need to drink to excess. As I was the day we got married, I am so pleased and proud to be married to this wonderful human being. He is a gem, a quiet achiever, and a top root, and whilst he is in my life I will continue to be a better person than I was before.

Happy Birthday to my beloved husband. In the time we’ve been together I don’t think I’ve succeeded in finding you the perfect gift, and I’m betting that this post leaves you more embarrassed than it does chuffed. But this blog is something that you’ve supported so wholeheartedly that I thought it only right (and cheap) to acknowledge you in this way.

Here’s to you honey. These happy days are yours and mine.