The name of this blog came about because a) I was looking for something catchy and memorable, b) because it is symbolic encapsulation of my experiences, and c) because I’ve always admired alliteration.

But behind the title there is actually a boob and it’s actually kept in a box: 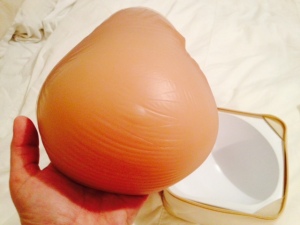 If only the real one was still this pert.

It was made in Germany and cost $400, most of which was refunded by Medicare. That was pre-Federal Budget. If I need a replacement I’ll probably have to make it myself by filling party balloon with the contents of a tube of hair gel.

It’s hard to describe the excitement I felt the day I finally got my boob in a box. For six weeks post-mastectomy, I had to wear a fibre-filled cushiony thing like a little pillow. The surgical site is too tender and raw to handle anything firm against it, and is also too swollen to allow a boob in a box to be properly fitted, so the pillowy one is shoved in the bra to provide some semblance of normalcy. The problem is that the pillowy ones don’t look, feel or act like normal boobs, and because they are so lightweight they have a tendency to want to sit up around your collarbone, which makes you look like you have an unsightly goitre. I am a D-cup, so being without one of my breasts made me feel incredibly lop-sided and impaired my balance.

So when the day came that I was able to be fitted for my boob in a box, there was much rejoicing. I had an appointment at a speciality lingerie place, with a lady who is trained in fitting prosthetics, and she took her work very seriously indeed. She bore an uncanny resemblance to Pauline Hanson, which was a little unsettling at first and made me hyper-aware of avoiding the use of the word xenophobic or making any reference to fish and chips, but she knew her business and had warm hands. 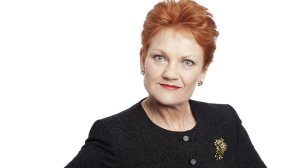 Although she had a passion for politics, Pauline found her true calling in the world of prosthetic norks.

Prosthetic boobs come in a range of sizes, and each size is weighted to feel like a normal breast. I was happy with the first silicone boob that was popped into my bra, mainly because it did not immediately start migrating towards my shoulder, but Pauline was not pleased with the result and made me turn this way and that, all whilst shaking her head and muttering that I was definitely a 9, not an 8 (boobs come in sizes like shoes). Once I had the 9 ensconced in my bra, well it was happy days! I kept looking at myself in the mirror, and laughing, as I couldn’t believe that it looked so real and even and normal. I could wear a t-shirt again! I could walk around the supermarket with both hands on the trolley instead of having to steer single-handedly whilst the other hand constantly readjusted my pillowy goitre. I could actually forget for a little while that I’d had a mastectomy. And that was the best feeling in the world.

I’ve had my prosthetic boob for 18 months now, and it has become very much a natural extension of my body. I am mostly unaware of it, until I have a shower at the end of the day and my boob gets put in its box for the night. Pretty much from the day after my mastectomy, people have asked me whether I’m going to have breast reconstruction surgery. Back then my answer was a big, fat, automatic NO as the thought of more surgery made me feel physically ill. These days my answer would still be no, but probably not as emphatic. The thought of voluntarily lining up for more medical procedures still fills me with dread, and my boob in a box is doing a great job.

But there are times when I wish I could wear v-neck tops or swimmers that don’t have a neckline reminiscent of the 1800s. It would also be wonderful to go braless (in private of course, even when I had two boobs they were not allowed out in public unrestrained) and not be constantly aware of what’s missing. One normal (44-year-old, size D, saggy) boob and a wide expanse of concave chest on the other side is not helped by even the fanciest of pyjamas, and without my boob in a box I am at risk of going around in circles like a rowboat with one oar. Maybe if I make it to my magic five-year ‘cure’ milestone, I’ll celebrate by getting a reconstruction. But it’s more likely that I’ll mark the milestone by dragging my boys on a trip through Europe or throwing a massive party, happy in the knowledge that whilst my boob might be in a box, I’m not.