Today I had to pick up a prescription at the cancer centre at the hospital where I was treated. Walking into that place, almost a year since my last day of treatment, brought it all rushing back. I actually had to take a couple of deep breaths and physically steel myself to walk up the stairs and go into the waiting room. At 12:15 on a Wednesday afternoon a couple of days before Easter, it was standing room only in there. It is not a small waiting room. So many people sitting silently, apart from an ocassional cough, waiting to do whatever they are told that they have to do. Despite what the cheesy telemovies would have you believe, oncology waiting rooms are not (in my experience at least) full of jovial head-scarf wearers who are firing up for another 12 rounds where they will no doubt triumph over nasty old cancer. People sit silently, avoid eye contact with each other, and jump like startled rabbits when their name is called.

Going back there today, combined with some very sad news about a family friend, has reminded me about how much I hate cancer. There are many, many reasons, but in the spirit of a man who looks like he’s wearing a bad wig even though it’s his own hair, I’ve limited this post to listing my Richard Wilkins-style top 5:

We did our best to protect our son from the worst of my diagnosis and treatment, and certainly we never discussed death or dying with him. But children are of course incredibly perceptive, although I didn’t realise quite how perceptive until one night when I was in the middle of chemo. I was putting my boy to bed, and after we’d read a story and I was adjusting his blankets, he stared at me thoughtfully for a while, and then said ‘Mummy, are you going to die? Because if you die, then it will just be Daddy and me’.

Insurance forms which ask you to tick the box if your cancer is terminal and you’re likely to be dead within the next 12 months are a special kind of torture to the cancer patient. No, I am not terminal at this point in time, so I’ll tick the other box. Well now you’ve ticked the other box, we’re going to need a letter from your doctor telling us what % chance you have of still being alive in five years time. Thank you, oh faceless insurance actuary so much for the reminder, I’d almost forgotten how completely shit this whole situation was and will continue to be.

3. Seeing every event as a possible ‘last’

Will this Christmas where I’m bald and too fatigued to even wrap a single present be my last? Should I throw my kid a huge birthday party this year like I did last year because what if there’s no next year? New York for my 50th birthday, or this year even though we can’t afford it because I might not make it to 50. Living in the now never felt so bloody awful.

4. Having no tolerance for bullshit

Anxious and upset about having to move from your current office to a very similar one on a different floor of the same building? Get a real fucking problem and get back to me. As I wrote this one, I suddenly thought, is this actually a thing to hate or a thing to love about cancer?

5. Knowing no doctor will ever again say to you ‘you’re going to be fine’

When I was diagnosed, I just wanted a doctor, any doctor, to say those magic words. Of course none of them did, and they never will again. As a result, I imagine EVERY SINGLE ache, pain, cough, twinge, lump or bump is the cancer coming back to finally take me out. It can be so tiring. (Oh, and then I start imaging that the tiredness is the cancer coming back). 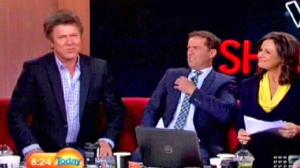 But on the upside, he looks worse with his own hair than I did bald.