One of the words that is used time and time again when discussing people with cancer is dignity. Hospital mission statements tell us we’ll be treated with dignity, we are lauded for our dignity by those viewing us from afar, and if cancer is to cut our lives prematurely short, then we seek to live our remaining days with as much dignity as the ravaging disease will allow. But the truth is that for cancer patients, dignity is something you very much leave at the door with your breast, bowel, kidney or liver …

Cancer brings with it a love/hate relationship with your body. You hate your body because you feel as if it’s betrayed you by allowing the cancer to invade it, but at the same time you feel sorry for your body because it’s being subjected to so many terrible things. Your body becomes something you simultaneously want to escape from and retreat into. The loss of dignity which occurs through so many surgeries, tests and treatments becomes evidence that your body cannot be trusted. After treatment is finished, this feeling lingers.

In a previous post I talked about how when I woke from my mastectomy surgery, I vomitted so much that I wet myself. Fortunately the humiliation of that particular situation was moderated by the massive amount of pethidine I had under my belt, and the fact that the nurses where two girls I had gone to school with some 25 years earlier. If you’re going to pee your pants in public, best do it whilst high and in the company of people who knew you when you thought George Michael was straight. Now that is embarrassing.

My friend Jules has bowel cancer. I had breast cancer. Together, we are the 40-something tits and arse of the cancer world, and have experienced the many and varied humiliations that cancer brings. I’m bringing Jules in here to talk about the indignities of the arse-end of cancer, firstly because she provides a stark insight into the reality of the experiences of a bowel cancer patient, and secondly because apparently the only thing funnier than a fart joke is one about a barium enema.

Jules: Having given birth to four children in the last 10 years, I used to think that childbirth was the biggest assault on the dignity that one could possibly imagine. However, since being diagnosed with bowel cancer, sometimes affectionately known as “arse cancer” 6 months ago, I have learned that childbirth, on the embarrassment scale, roughly compares to leaving a nightclub toilet, shitballs drunk, with your skirt tucked into your underwear.

I don’t know how many times I have heard people say that they avoid going for a colonoscopy because they would be too embarrassed. I’m here to tell you that having a camera inserted into your backside when you are for all intents and purposes asleep, does not even scratch the surface of what comes afterward, if you do, as I did, have a bad result.

For me, it all started when I woke from the colonoscopy to a nurse putting my underwear back on. Horrified, I asked her what she was doing, and she patted my leg (yes, really), and said in a conspiratory whisper, “It’s ok dear, I do this all the time.” I very much wanted to tell her that I fucking didn’t, but in all honesty, I was stunned into silence. By golly gosh though, that was just the beginning.

Soon after, I was called to the radiology centre, to have a rectal MRI. I arrived cheerfully enough, thinking these machines can see anything they want to, from the outside, right? Well, as it turns out, the bowel is quite hard to see on an MRI, which meant that I was led into a room by a nurse who asked me, to my utter mortification, “do you know what KY Jelly is?” whilst waiving a large tube around menacingly. As we were talking about a rectal MRI, I was absolutely certain that I didn’t like the way this conversation was headed, but I took a deep breath and said “I have, but I am pretty sure that I have never used it in the context that you are about to tell me about.”

I used to think that the words ‘panties’ and ‘moist’ were the two worst words in the English language, with both being an evocative assault to the eyes, ears and mind. These days, I can add three more words to that list. Meet my new friends ‘rectum’, ‘mucus’ and ‘discharge’ – most special when used together in a sentence, put to you by a young and charming consultant with movie star good looks. Seriously, bowel cancer would be so much less embarrassing if the doctors were ugly and old. 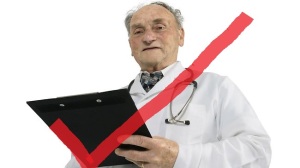 A few months after diagnosis, I was admitted to hospital with a bowel obstruction. After a CT scan, the last test I had to have to confirm I needed emergency surgery (to insert a hole in my stomach that I could take a shit out of), was a little number called a barium enema. I now know that the other most feared words in the world, when used in a sentence are “lie on your side, and raise your knees up towards your chest.” It doesn’t take much imagination to work out that if your bowel is completely blocked, anything of this nature is going to be roughly comparable to having a coke can (or indeed the beverage of your choice), shoved up your arse and then pulled out again. After that, being rushed into surgery, and thereafter having my bum reside rent free in my body as a completely useless organ was nothing but a kindness.

They say what doesn’t kill you makes you stronger, and at one stage, it felt like the humiliation could kill me way before the disease got a chance to take hold. I could not cope any other way, unless I met it head on with humour, and it helps me cope with the constant invasion of an area, which to my mind was only ever designed to be an exit point. I’ve had to come to terms with a body that I worry is no longer attractive to my partner, due to the “alterations” that have been made, hopefully temporarily, to the plumbing. Coming to terms with this is very much a work in progress, but luckily I have a husband who loves me for me, and has also been able to see the funny side on several occasions when the old adage “if you didn’t laugh, you’d cry” is about to be played out. This very much the reality of cancer treatment, a constant mind fuck, and quite frankly, a body fuck, just not in the areas you would usually expect.

Julie and Jules: So now we’ve got you laughing and cringing simultaneously (it’s a special talent brought on by chemo-therapy – Spiderman-like superpowers or even x-ray vision – hello Dr Handsome – would probably have been more useful, but you make the best of what you’ve got) we would like to deliver a serious health message.

Yes, a colonoscopy is embarrassing, but all the things detailed above … well they don’t bear thinking about, do they? The symptoms of bowel cancer are listed on the Bowel Cancer Australia website. Please if you have any of these symptoms, see your doctor straight away.

Mammograms involve getting your tits out and having them squashed between two metal plates – that’s nobody’s idea of a good time, but  neither is having your breast cut off followed by 8 months of chemotherapy and radiation. If you are over 40, touch yourself regularly, have a mammogram every two years and see your doctor immediately if you notice anything unusual.